In the farm that I’m volunteering at, the cows are let to roam around free and wild in their field. free and wild, and still, contained within the boundaries of the field, behind a light wire fence that’s enhanced on the top with one or two electrical wires. and you wonder- what REALLY hold this herd of cows behind the fence? for sure they are strong enough to push against the wooden poles that it’s connected to, and pull them off the ground. for sure they can jump higher then the electrical wires. why don’t they do that?

I asked John about the electricity thing. he told me that them, unlike us, stride barefoot on the face of the earth, hence they’re a really good electricity conductor, unlike us, with our insulated shoes. when they touch the fence with their bare wet ‘nozies’ (that’s John’s way to pronounce noses) they create a circle with mother earth, and the nose is such a sensitive tissue- you would’t want to be electrocuted there.

When they’re calm and content they will stay in their squares of a field, walk only within the boundaries of the fence, eat the same grass day by day, sleep maybe even in the same spot in the field night by night, tread the same old paths that they create on energy lines time and time again. 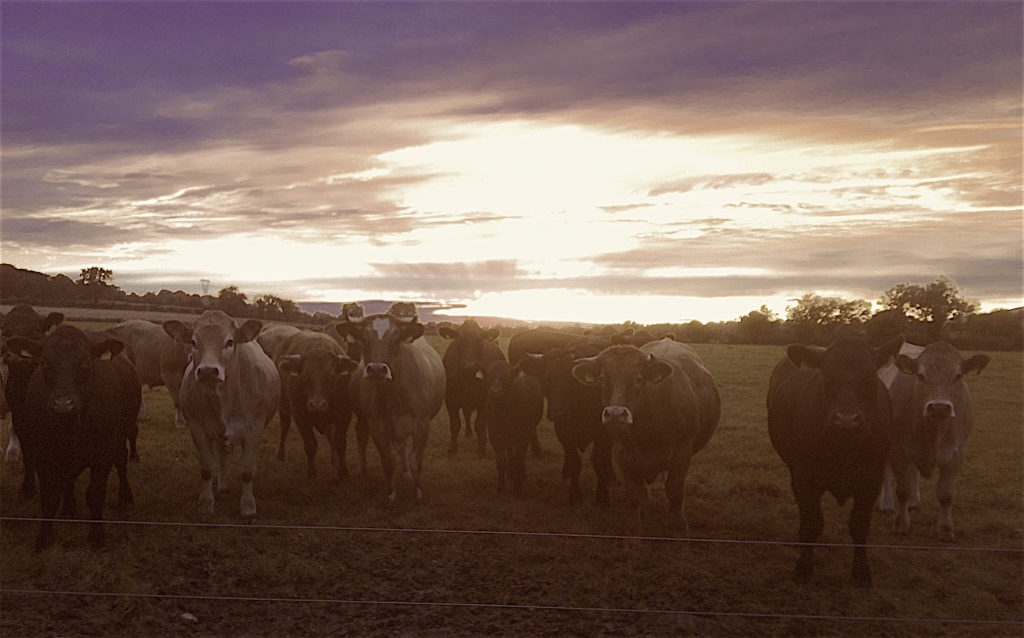 We would open the gates and the main women-&-children-cows tribe will be reluctant to leave their home. what awaits them outside of the field? nobody knows. it might be a green lush new field full of yummier grass and new paths to tread and new preferred spots to sit down by, but it also might be the path to death. John would circle around them on the quad when I’m sitting in the back behind him or in the back box. it would force them to get away from that noisy fast machine – away to the gate, away and out.

And they would run. 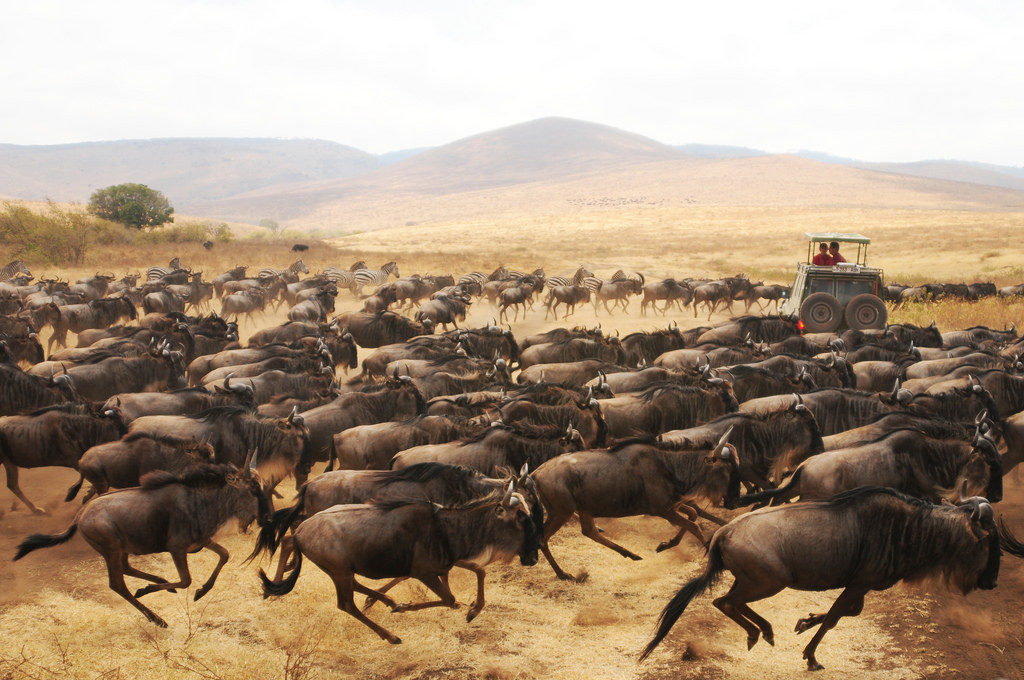 It’s an experience to see a herd of animals running, maybe running for their life. their hoofs hit the ground with the sound but they would also shit and pee all over themselves on the way, and the young calfs that are shorter would get filled with shait on their back and face, beings shoved between the legs of the taller and much more massive elders. and we would gather them in a square between high walls and separate who we need to separate, not so much with ease.

And you could feel the fear and the panic filling the air, thick and apparent and existent as the air itself. it would smell like cow’s shit, like their breath and the farmer’s sweat, like the smell of all those bodies so close around each other, packed together in a small little square of enclosing walls and boundaries made by human beings. but their horror that you’de feel would be much more then the smell and sights- the fear would be there, not seen, not smelled, but stronger then any feeling in that space.

I look at it now and the only other place and occurrence in my life that I could feel such intense feelings in the air itself was in my “holy” homeland of Israel. in some tense situations between jewish and muslims, maybe in bad times that Jerusalem knows periodically once in a while, and most of the times in the territories, on the way to a small moshav I once used to leave in, I could almost smell it, almost see it with my own eyes as part of the air I breath.

I grew up in this harsh heavy city of stones, so as a kid I didn’t much notice it, it would’t register. but once I left and lived in other cities, once I’ve seen other countries, since then, every time I take the bus up to my hometown of Jerusalem I can feel it, as the bus drives up in the road between the hills, as it rises up so does the air get heavier, your belly gets heavier, the air intensifies. and by the time it would reach the central bus station in Jaffa street you would get off it, to the coldness of the high capital, and you gained more weight, the weight of the disagreement and madness and hatred gaze in some eyes and intensity of two populations that would hurt each other, each one of them inflicting some sort of pain, each other suffering in some way by the hands and guns and hatred look on the eyes of the other.

So we got one of the yellow cows that we wanted to sell, held up in a shed behind a gate that separates her from the group that she grew up with and grazed with probably for most of her life.

You would never know the will of a cow or the strength of an animal until you would see her facing the terror of death. no fence is too tall, no electricity line is too painful, no closed shed is a closed possibility. and then, in that time and that place, there she flew off and managed to jump, over the gate and back to her tribe. it took her a few times to succeed, managing to brake the gate on her way, but she did manage to get through it eventually. 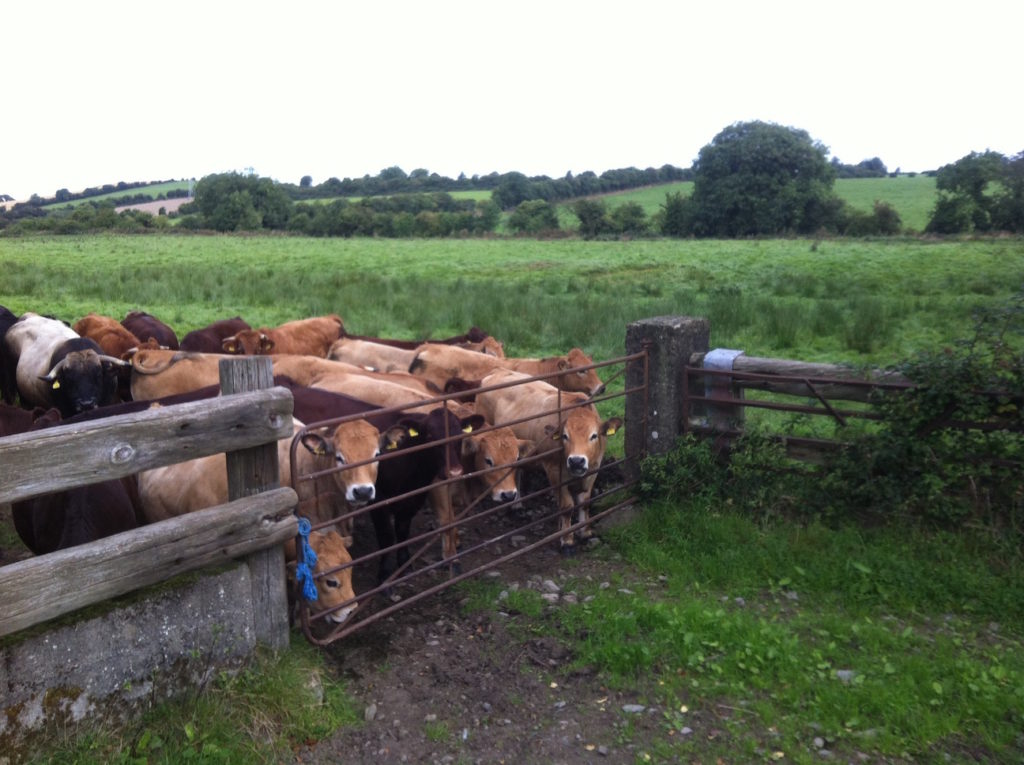 In wintertime, Ireland gets too cold and rainy for the cows to live in a field, so they’re being moved to their shed home for the rainiest months. John told me, that comes the day, that after they’ve been locked so long in that shed, spring time arrives and it’s times for them to go back to the field. He told me that the day he opens the gate for them, they do not know what’s happening. they will not imidiatly go outside. it would take them some time to realise that they are allowed out.

And when they finally do so, it’s like in the threshold there’s an invisible line that defines the inside and confines it from the outside, and the cattle don’t step on the line under the gate, they hop over it. it’s as if they can not step on the defining line, they have to jump over it although the gate is not there anymore to jump on, there’s nothing there, only the definition of confining the outside from the inside.

Coming back to my understandment that these borders are more then just physical, they etch a psychological barrier in your mind. with enough will power they will be breached, but the will is mostly not there and they are usually just kept to be, and the cows are kept to be inside the field / shed.

And what will it be? more wars? more deaths? more bad economy? more hatred? more and more hours in the office that we sit and waste our life earning that absurd wage that is not sufficient enough to support our family, to fill the minus in the overdrafted bank accounts?

How much would we grind our teeth, just to pay to eat grass, just in order to pay to drink water, just to pay for the right to be in a fecking field, for the right to sleep in a certain place on the earth? how much of that do we need to chew every day until we understand that we had enough, that it’s time to move on, that it’s time for our human tribe to make a new path in a fresh grass and be back to striding on the face of the land, barefoot and enclosing energetic circle?

And I wonder, all that definitions that everybody ask me all the time whilst I’m traveling- what is your name, where are you from, what is your job. is that a barrier?

So, would being 30 years old a barrier? would being a human being a barrier? to be ME, is that my ego barrier? what will it take and how long is the road and how much pain, how many migraines will I need to go through until I slowly start to dissolve one barrier after the other?

And I wonder, for those patterns that appear in me, pattern over pattern that I’m mostly not conscious enough or present enough to even perceive that they’re there. barrier of a pattern, patterns of a barrier. pattern of shyness in the crowd and pattern of pain and pattern of judgment and pattern of…

In our animal farm of a society, the one that I’m living amongst, us cows are let to roam around “free” and “wild” inside our own mental barriers of ego, authorities, and culture.

Wishing for the days that we could rub our bodies against a fellow herd being, like the cows rub against each other, rub their nozies, rub their heads on the sides, clean each other with the tongue, lick each other. I wish for the days that life would be simple as grazing the grass, shitting on the grass, and sleeping on the grass. without dinner tables, knives and forks and plates, without toilets and beds and rooms to hide us while we’re having a piss or making love.

I wish for the day that we would be free to meet our body and soul needs without hiding it- that we could be naked in public, would not be ashamed to take a shit, and would have all the freedom just to have sex whenever we want, wherever we want, no boundaries, no walls and doors, no fences, no concepts about what sex is and isn’t, should and shouldn’t, just the bodily feelings, sensations, emotions… I’m wishing for that day.